Ethereum gained the much-needed peculiarity when it launched its smart contract in July 2015, giving it a point of departure from Bitcoin. With the progress made since Ethereum 1.0 upgrade to date, it is understandable to describe Ethereum’s ecosystem as one that is consolidating. Ethereum smart contracts run on the Ethereum Virtual machine and are developed using solidity, a globally acclaimed programming language.

The ICO rush of 2016/2017 brought to light the immense utility of smart contracts, a technology that was only operational within the Ethereum blockchain at the time. Since the ICO bust, more light has shone on the numerous real-life uses of smart contracts that realistically undergirds the future of digital and e-economies.

Smart contracts are essentially commands that are in-built in codes or machine language that makes it possible for transactions to be executed automatically without manual interference. With the conditions necessary for each transaction already defined, each time the conditions are met, the transactions will be completed.

The Reason for Ethereum Smart Contracts

Ethereum smart contracts gave rise to the first set of ICOs that became a global phenomenon, and later, IDOs, IEOs, and so on. The emergence of DApps to a large extent owes it sustainability to smart contract functionalities. Non fungible tokens and DeFi have thrived due to the agile capabilities made possible by the early adoption of Ethereum smart contracts. These other talking points are also worth looking at:

Global coverage – When you think of going global, the most practicable means to do so is to leverage existing technologies like smart contracts to bridge borders and create a connected community. Smart contracts working within blockchains, makes such an ecosystem safer and recognizable. You have the world within your reach with a smart contract adoption.

Solidity is trusted – Solidity undergirds Ethereum smart contracts and is now taught as a body of knowledge so that expertise can be recreated and the needed human resources for the management of the ecosystem are replenished.

Security – Like the blockchain, smart contracts are built to be safe and hack-proof to a great extent. Well-tested and audited smart contracts like that of Ethereum gives the user a great deal of peace of mind knowing that assets and other underlying resources that it governs are safely accounted for and administered.

Savings – The huge savings in man-hours and allied cost for manual attention that smart contracts help users avoid is huge. To think that the possibilities of smart contracts in time and cost savings are enormous is hardly every accurately reported.

The major infrastructure that the Ethereum ecosystem runs on is the EVM, which makes it possible for network nodes to work in sync to execute smart contracts. The smart contracts are what transforms the blockchain into such dominant processing platform that fulfils financial and non-financial functions. Games are run by smart contracts, which also drives social networks that so far, are hosted on the Ethereum blockchain.  The complexity of the EVM is such that only a few people can fully grasp at present, and this explains the upgrade to a defined web assembly language, eWASM for more inclusivity.

With eWASM, web browsers are going to be linked to the Ethereum blockchain so that decentralized app code can run on them. The other side of the coin is that developers can choose from a range of programming languages to use for code writing such as RUST, C++, and C, to name a few. This development is likely to lead to a surge of programmers on the Ethereum ecosystem as the solidity restriction would no longer be necessary.

The upgrade of the old Ethereum ecosystem to Ethereum 2.0 served several purposes and one of such was the changeover from the energy-intensive proof of work to proof of stake algorithm, which is globally justified as more energy-efficient. The proof of work algorithm required huge energy consumption as well as data replication that many experts assessed to be unsustainable.in view of the huge resource requirement. The upgrade to Ethereum 2.0 was then designed to reduce cost, speed up transaction processing times, make room for agility, and further the cause of a global adoption

The proof of stake mechanism entrusts the algorithm to pick a node for the recording of a transaction in a manner that is random, and yet more considerate of node owners with higher token balances. The ecosystem is insured with the node owner’s deposits and the complexity attached to the massive cryptographic outlay of the past is simplified. Overall, the throughput efficiency is heightened, and the network becomes faster and less-cost intensive. Since every node provides a stake to be eligible for the validation process, a system attack becomes  uneconomical for anyone to execute.

Ethereum smart contracts are responsible for the bulk of the projects in NFTs and DeFi, which experts valued at over $100 billion as of early Q4 2021.

Ethereum has maintained its Top 3 position for the past 5 years, and experts now believe that Ethereum has a better growth trajectory than Bitcoin in the coming years. Ethereum has given rise to a new body of knowledge with its smart contract success, and as it undergoes revisions and updates, better outcomes in service delivery and innovations can be expected. 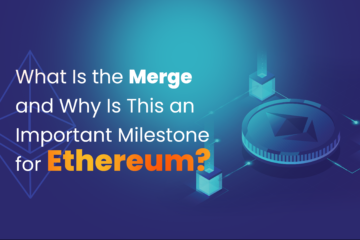 What Is The Merge and Why Is This an Important Milestone for Ethereum?

At its inception, the Ethereum network depended only on the Proof-of-Work (PoW) consensus algorithm. It’s a quick and simple way to get everybody on the same page, but it has a fundamental flaw. As the Read more…