Everything you need to know about Terra and its ecosystem 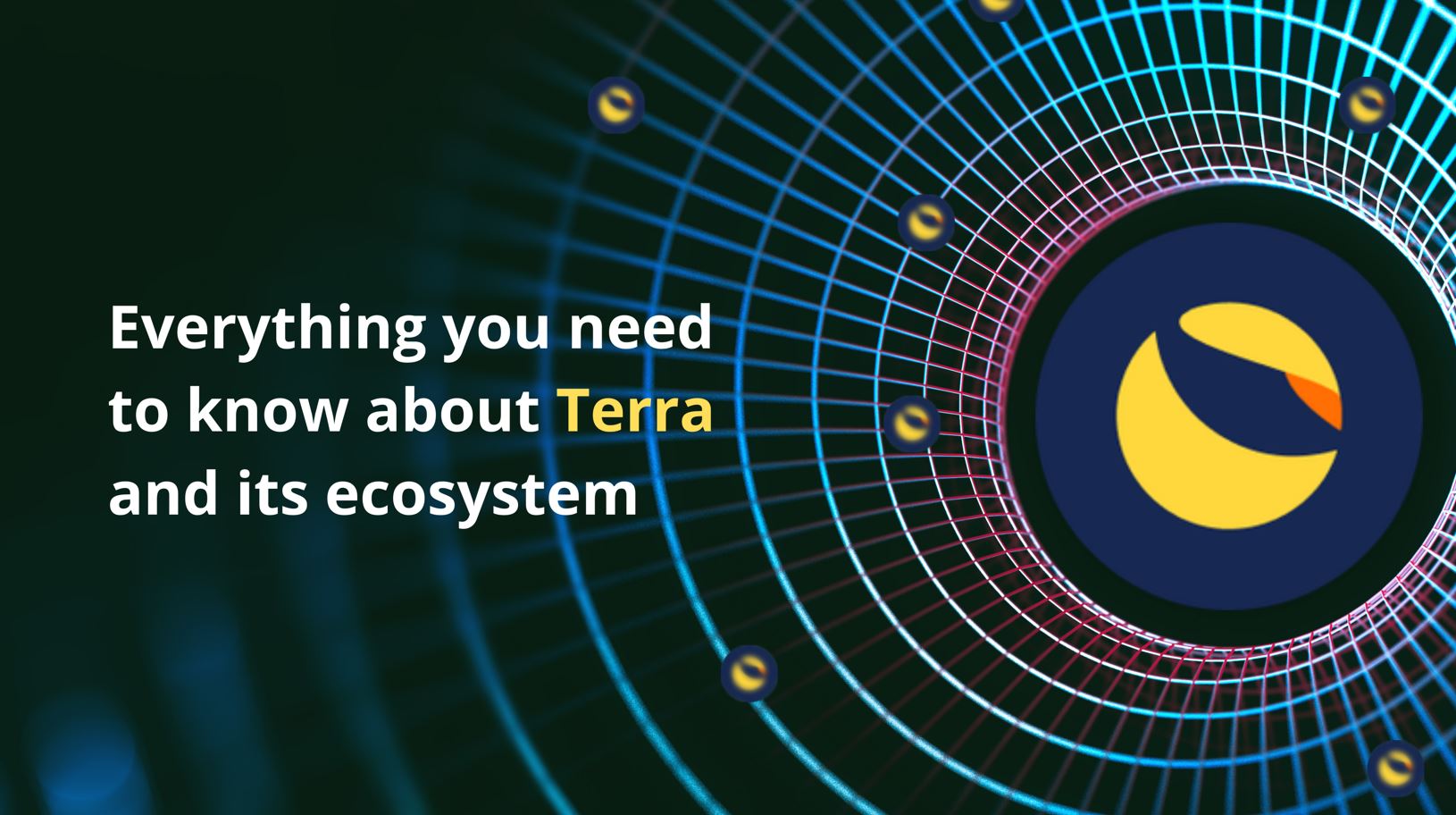 Cryptocurrencies are making fast inroads into the world of finances. Their spread is massive and stablecoins are at the centre of this evolution. Stablecoins are arguably the most significant of the current crypto currency ecosystem and are quickly closing the gap between fiat money and digital currencies. Between 2020 and now, there has been a massive growth in the value and capitalisation of the stable coin market. It has grown from $20bn to almost $160bn market cap in less than two years.

With all the growth experienced in the stablecoins market in recent times, the trust people have for many of them is still sceptical, especially in the face of high volatility. But amid all these growing stablecoins projects, Terra is reaching for the stars and getting the attention it deserves. Terra’s LUNA Coin is considered one of the fastest-growing coins in the past few months. It has algorithmic stablecoins, built for the fast-growing e-commerce economy. It is also taking centre stage in the coming generations of digital money through its strong, and highly recommended smart contract blockchain.

Currently, four of the largest crypto exchanges in the world believe in the Terra project and are investing $32million into it. When global exchanges come together on one deal, there’s every possibility it’s worth its salt. And in Terra’s case, Binance Labs, OKEx, Dunamu and Huobi capital have all thrown their hats in the ring. But what’s this Terra taking the crave of many? 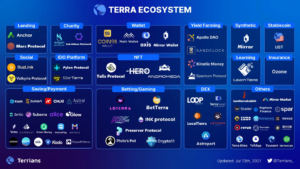 Terra is a crypto project founded by Daniel Shin and Do Kown. Kown founded the Terraform labs, the company behind the Terra ecosystemin in 2018. Shin, on his part is also the founder and owner of Korean company, Ticketmonster. Both crypto enthusiasts are leading a slew of global exchanges and have attracted investment from Chinese-based FBG Capital, Hashed, Kenetic Capital, Arrington XRP and Polychain capital.

Terra, in its whitepaper released in 2019 was described as price-stable and driven by growth. The paper said its price stability is a question of its elastic money supply, which is enabled by good mining incentives.

Terra’s protocol also uses seigniorage- described as profit made from the issuance of currency to stimulate wider and faster adoption.

Seigniorage has been used by the Chinese Yuan, the Euro, Japanese Yen, the British Pound Sterling, Won and in the Special Drawing Rights the IMF gives to nations, which is a reserve asset that supplements and helps the currency reserves of IMF’s member nations. These are believed to ultimately signify its apparent stability. Terra’s collateral is the LUNA token and and the TerraSDR is its flagship currency.

Although the paper says it’s considered and marketed as a stable coin, it has all the makeup of a fintech platform on the blockchain. Its target market is e-commerce. Its main stable coin, the Terra USD, known as the UST is an attempt to solve the problems of volatility seen with Bitcoin and Ethereum, two cryptocurrencies with criticisms of being too unstable to be used in e-commerce.

What Terra aims to do is to complement already existent solutions for payments. It’s offering its own payment option that will allow customers pay for their products using LUNA, its coin. When it started, Terra’s focus was on the Asian market, but it has gained presence in recent times in the US, as a result of its trustworthiness and relative stability.

LUNA Coin and the smart contract algorithms secure the UST, used as its main stable coin. The widespread adoption desired by Terralabs is hinged on the token’s fiscal roots. With a clear understanding and working of fiscal responsibility, in addition with the protocol’s elastic monetary governance, Terra is expected to spark more hope than fear. Its treasury has similarities with the services and methods of the Central Bank.

Various members of the Terra community have opportunities to submit proposals that will tussle for different stimulus programmes. The stimulus is then vetted and the rest of the members of the community will vote upon it. This apparent transparency is encouraging the widespread adoption Terra seeks.

The conceptualization of Terra borders around the ambitious and taking on Alipay, which has established based in the Asian market is audacious for the e-commerce space but it also sparks confidence.

Its smart-contract functionality makes it a promising venture in the fintech ecosystem. Its smart contract is leveraging algorithmic stablecoins which have their stability maintained and ultimately determined by internal algorithms. This is seen as a strength by many crypto enthusiasts.

The inner workings of Terra

Terra has a decentralised App known as CHAI. It is one of its most popular d’Apps. You can get a movie ticket on CHAI, and it’s one of the most sought-after things on there.

To do this, you’ll have to mint your Terra stablecoin on the website and this means you also have to burn LUNA tokens, as much as you need, to achieve that. When your stablecoins are ready, you can pay for your ticket online or in-store using CHAI.

For every ticket you buy with these stabecoins minted, Terra’s blockchain has a small transaction fee it spreads to LUNA delegates – these are LUNA token holders who seek to secure the network by delegating their coin to a staking pool.

With its base on the Cosmos SDK, Terra uses a proof-of-stake consensus for its delegates. This is strengthened and secured by validators, who are decentralized and are getting rewards when they settle transactions.

To select the most active validators with the highest amount of LUNA tokens, there’s a network consensus that validators and stakers compete for.

Terra’s stability is leaning on the algorithmic stable coins. This means that the stability of its price is dependent on algorithms, as designed by its protocol.

The value of one UST is $1. With the LUNA token fiscally maintained, this is not expected to change. This happens through the supplementary efforts of the LUNA on the UST which makes it equal to the dollar again when it drops.

For Terra stablecoins to be minted, the dollar-equivalent of LUNA will be burnt. This leads to a small portion of the LUNA token being used to mint stable coins. This is sent to the Terra community treasury and ensures minting is profitable for the network. So, the more Terra is minted and LUNA burnt, the stronger the network.

Algorithmic stablecoins are however considered very controversial because of their price volatility, typical of normal currencies. Algorithmic stablecoins prices are kept secure by smart-contract algorithms and market incentives from independent buyers. These have been seen to be unreliable in a financial crisis. When these are not forthcoming, the prices tend to crash as seen with IRON from Iron Finance, which also used algorithmic stable coins. When it lost its peg to the dollar, it crashed to zero and lost almost $1bn in market capitalisation. These are seen as some of its cons.

LUNA is Terra’s protocol token. It’s used for staking and serves as collateral for the algorithm’s stable coins. It has a supply of 1bn coins and once that’s exceeded, the protocol will burn LUNA coins automatically.

Terra stablecoins stability are hinged on the performance of LUNA and vice versa. They have a clear relationship that makes them dependent on another.

It has a six-second block time, according to its founders. This is possible through its programming language, Rust.

It has great memory control and makes the workings of Terra easier on the block chain. Its speed is seen as one of its core strengths.

Another key area Terra thrives is that transactions lead to the payment of gas fees with the minimum price set by each validator.

A stability fee is charged on transactions that involve swapping stablecoin. These fees range from from 0.1 to 1%. For this, a Tobin Tax may also be charged.

The CHAI app also makes using the stablecoins seamless, just like any other mainstream payment app.

Terra Bridge is also being worked on to encourage interoperable transfer between Terra, Binance Smart Chain and Ethereum. There are also works in motion to Terra stable coins to Solana.

Terra is considered too decentralized by blockchain enthusiasts. Its 130 Validators are a mere fraction in comparison to Ethereum’s more than 3000.

Like every project in the Decentralised Finance (DeFi) industry, found in its early stage like Terra, it will have its struggles.

Top 10 validators of network hold more than 40% of LUNA’s delegated supply and that’s a concern as its stability isn’t in the hands of many.

Terraform labs, Terra’s ownership has also been subpoenaed by the Securities and Exchange Commission for violating security laws.

Conclusively, it is a safe space for Crypto beginners, still unsure of the stability of that market. It has partnerships with 15 e-commerce companies and its CHAI app is easy to use. It is also enabling transfers of assets between Terra, Solana and Ethereum using its new upgrade Col-5. The value it has locked in its protocols also gives a glimmer of hope about its potential.