What Is The Merge and Why Is This an Important Milestone for Ethereum? 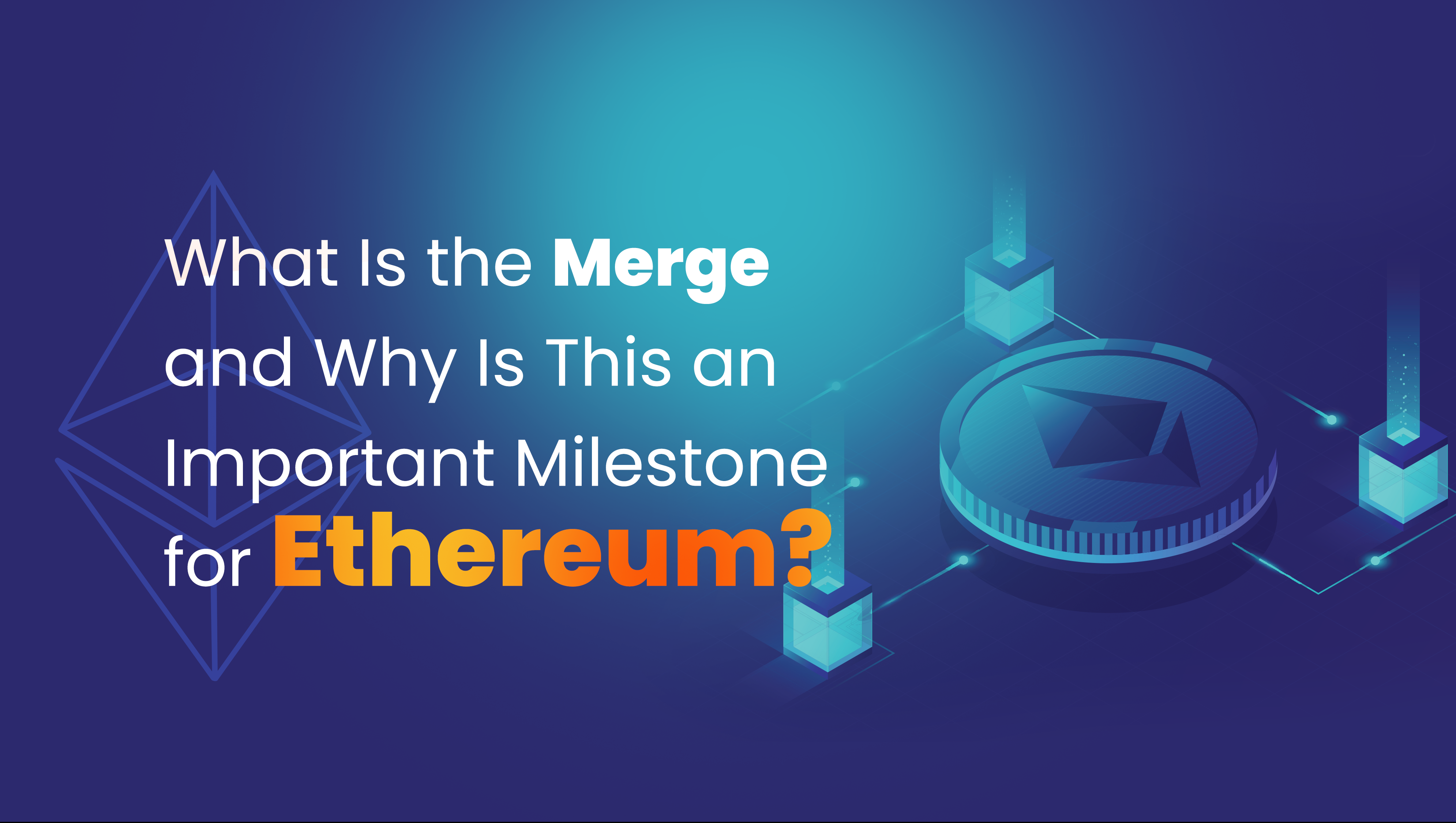 At its inception, the Ethereum network depended only on the Proof-of-Work (PoW) consensus algorithm. It’s a quick and simple way to get everybody on the same page, but it has a fundamental flaw. As the number of transactions on the blockchain rises, so does the amount of processing power required to tackle these issues.

As environmental concerns mounted, governments throughout the world began to scrutinize the use of energy-intensive cryptocurrencies like Bitcoin and Ethereum. To increase the network’s scalability and transaction throughput, the Ethereum Foundation has elected to transition from PoW to Proof-of-Stake (PoS), a consensus mechanism that requires less computing power and hence less energy.

The eventual unification of Ethereum’s mainnet with the proof-of-stake beacon chain architecture is the focus of The Merge project. ETH’s Proof of Work method will be replaced with Proof of Stake (PoS) after “The merge”.

The PoW consensus method is currently in place on Ethereum’s mainnet.

The Proof-of-Work or as we call it the traditional consensus system, safeguards several cryptocurrencies, including Bitcoin and Ethereum. One central authority or leader maintains track of every user’s balance when it comes to digital currency. An online currency must have proof of work to operate without the interference of a company or government.

Solving the “double-spending problem,” as it is often called, is significantly more difficult without a strong leader in charge. If a user can double-spend their coins, the money becomes worthless. Because digital activities may be copied and pasted or emails forwarded to a large number of recipients, it is possible to pay twice while making a purchase online.

Here is how PoS comes to the rescue. The Ethereum-powered decentralised finance (or Defi) protocols have grown in popularity, and the blockchain has struggled to keep up with demand, resulting in increasing transaction fees. Interestingly this is something foreseen from the beginning of Ethereum’s development.

As compared to Bitcoin, Ethereum’s blockchain is required to support a broad variety of future developments, such as Defi transactions, stable coin smart contracts, NFT minting, and more.

Hence, it was decided to create a new ETH2 (Ethereum 2.0) blockchain, which should be finished by the end of 2022, according to the current estimate. The new consensus technique, proof of stake, will be implemented in the latest version of the Ethereum blockchain. 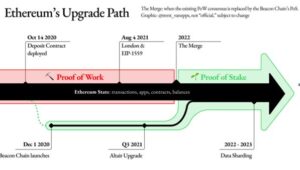 One thing to note here is that there are times when nodes fail, or when a “bad” block is accepted, which results in the loss of some of the validator’s stake in the process.

Mining fees are given to Ethereum’s miners after Merger?

To address the curiosity among miners, because of the activation of EIP 1559 on Ethereum, most of the Ethereum transaction fees will have already been used months before the merger happens. Proof-of-stake block proposers will get “tips” or “priority fees” instead of proof-of-work miners for any payments that remain after EIP-1559.

Benefits to the Network

On the contrary, as a disadvantage factor, Ethereum’s security and scalability have been questioned by some. The continuous postponements of the merger are perhaps the biggest issue.

The Ethereum team conducted a “Shadow Fork” test on April 11, 2022 to move closer to the implementation of the Ethereum Merge. The test was successful. In a “shadow fork,” data is transferred from the Ethereum blockchain to an isolated testnet. It is possible to use a separate blockchain network known as a “testnet” to conduct tests and experiments on the blockchain. For testing new features before they are sent out to the rest of the network making shadow Fork act as a testing ground.

Tests on both the current Ethereum and the Shadow fork network have shown implementation issues in clients, according to some of the authors and developers but it is being addressed.

Using the Proof of Stake (PoS) mechanism, Merge indicates Ethereum’s shift to a more secure system. Proof-of-Stake (PoS) is expected to significantly lower the network’s energy usage and make it easier for Ethereum to grow in the future.

Challenges: However, coming up with a new Ethereum consensus mechanism is a challenging task. Ethereum’s PoS design introduces an extra set of game theory principles to ensure that network validators act by their word.

Many applications will be unable to utilise Ethereum as long as the network’s high gas costs and slow speeds prevail.

There are other Proof-of-Stake (PoS) chains vying for the attention of users with the promise of faster and cheaper transactions than Ethereum’s. 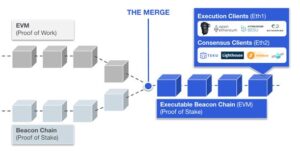 “Ethereum 2.0,” which includes the adoption of sharding to increase network performance by breaking up activity into portions that can be handled simultaneously, has been superseded by the Merge. Since the introduction of PoS, sharing has been pushed back until 2023, although it is still part of Ethereum’s plan.

Layer 2 rollups, such as Arbitrum, Optimism, and Loopring, have attracted the attention of the Ethereum development community because of the value that has been locked into these third-party solutions for scaling the Ethereum network.

While each layer 2 solution has its unique advantages and disadvantages compared to Ethereum, they tend to be substantially faster and cheaper than the foundation layer while still ensuring important security.

Following the merger: This will mark the end of Ethereum’s proof-of-work era and usher in a more sustainable, environmentally friendly Ethereum. At this moment, Ethereum would be one step closer to attaining the full size, security, and sustainability described in its Ethereum vision.

It is crucial to note that one of The Merge’s implementation goals is simplicity, to accelerate the shift from PoW to PoS. Developers are concentrating their efforts on this transition, eliminating extra additions that might cause a delay.

This implies that certain functionality, like the capability to withdraw staked ETH, may have to wait a bit longer when the merge is finished. A post-merge “cleanup” update to handle these features is planned, and it is anticipated to happen fairly shortly after the merge is done.

It is exciting to see that the world’s oldest smart contract blockchain is on track to become an energy-efficient model by sometime in 2022, despite the many setbacks it has encountered. Ethereum’s PoW mining is coming to an end with the difficulty bomb, which will pave the way for Merge’s improved stake system, which will boost scalability, security, and accessibility.

Do you think this is enough? The answer is no. But it provides a solid foundation for Ethereum’s expansion into layer 2 networks through the use of ZK-rollups and other techniques. Vitalik Buterin’s recent book, “Endgame,” may give you a clearer idea of his views and aspirations for Ethereum.

Ether has vowed to become better. Even Bitcoin, the godfather of cryptocurrency, can’t keep up with this newcomer’s ambitions. However, the clock is ticking.

A big upgrade to Ethereum’s blockchain called the “merge” was expected in June, opening the door to a more efficient and environmentally friendly crypto future.

Amidst a year of rising inflation and tighter money supply regulations, ether’s popularity rose due to the anticipation. Proof-of-stake mining was expected to take over from proof-of-work mining in Ether, but investors have been let down by the delay.

Ethereum gained the much-needed peculiarity when it launched its smart contract in July 2015, giving it a point of departure from Bitcoin. With the progress made since Ethereum 1.0 upgrade to date, it is understandable Read more…